Book a viewing
Make an offer 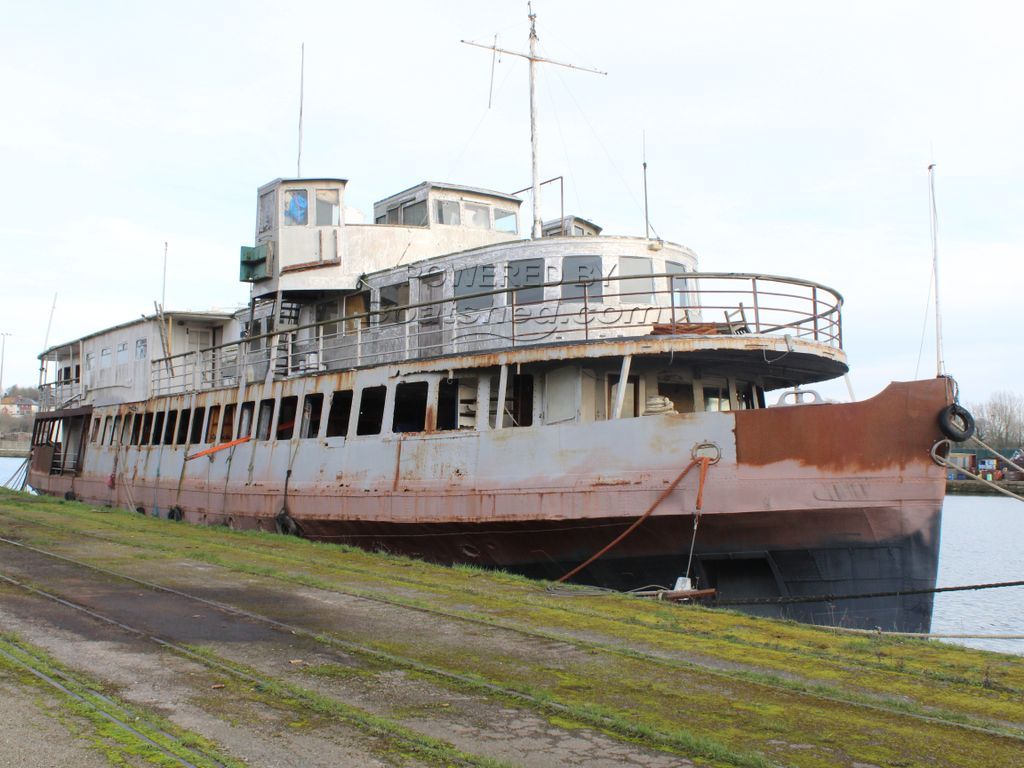 Historic Ex Merseyside ferry launched in 1951 and built to provide a link between the Wirral and Liverpool. Over the years she has featured in TV programs as well as the song by Gerry and the pacemakers. She has strong connections to the West Country being built in Dartmouth and once retired from service in 1976 was used as a club ship and training vessel based in Salcombe.

The twin Crossley engines were removed prior to delivery of vessel to new owners The Island Cruising Club, Salcombe in June of the same year. The new purpose was to provide a fully self-supporting residential sail training operation and clubhouse. The conversion provided for simple bunk accommodation for 93 people. The ship was used for 40 years as a sail training base in Salcombe, Devon before being towed to Sharpness Docks in late 2016. Most of the ship’s original line drawings and other historical build records have been preserved for this registered national historic ship. The original Ship’s Registry Part I document has also been preserved. The lower deck provided accommodation and a bar facility. Two 240v generators located back aft in the tiller flat provided all the ships power until 1999 when shore power, fresh water and a telephone line came aboard. The gen sets are still in situ and require work to make them fully operational. Fresh spring water was piped aboard and filtered for impurities including nitrates. The ship has a forward fresh water tank located lower deck forward and a header tank in the funnel. The very large redundant fuel tanks could be used as holding tanks for the ship’s black water treatment plant.

The main deck has the male and female shower block in the aft area. The area forward was converted to provide a large galley with walk in chiller serving a dining saloon further forward. Seating capacity in the port side dining area was for 60 covers and expandable to 120 covers by removal of the central fore and aft partition. The starboard midship/ forward area was used as a lecture saloon and storage area for the dinghy sail training operation. Forward of both these areas was the RYA training centre office.

The upper observation and promenade deck was converted to provide double bunk cabin accommodation back aft and a saloon area forward with an occasional second bar. The funnel was converted into the ships central heating and hot water boiler room.

The bridge was converted into further accommodation and the port bridge wing was used as a dinghy sailing race starting office.

She was moved to Sharpness to start a long project, and to refit her as a sailing school and boutique hotel. Work began on her but problems with funding due to loosing her eventual mooring meant that the project has been put on hold. The hull is largely finished with only some minor work left where the dock blocks where holding her, and the remainder of the ship has been mostly striped out. She has had new aluminum installed on her upper decks and has all the plans including the logistic process for her re-purpose.

She obviously still needs a lot of work completing and there is an outstanding balance on the work that has already been carried out. Once you can see through her initial appearance, you are left with a huge vessel with potential of a similar size, and some amazing features, the like of which are not seen or being built today... as with many things!

The suspended 2016 project plan and business model was to upgrade the ship into a multi purpose 14 roomed boutique hotel and hospitality/ function venue on the main and upper decks along with a residential dinghy school for 30 children on the lower deck. Dumb waiters connecting the galley with the lower deck bar and the upper bar and bistro were planned. The detailed design plans for the 2016 30 year life extension project were completed by the Sharpness Dockyard company. These plans would be a good starting point for a new owner looking for a professionally prepared blueprint for the conversion of the ship into a viable business model. I might also suggest that as the shipyard are extremely familiar with this vessel the project could be considerably sped up by using their knowledge and skill.
£300K has recently been spent on the hull.

These boat details are subject to contract.
Note: Offers on the asking price may be considered.

This Passenger Vessel Ferry Famous & Historic Merseyside Ferry has been personally photographed and viewed by Oliver Yates of Boatshed Bristol. Click here for contact details.
The particulars herein are intended to give a fair description of the vessel but are not guaranteed as accurate. They shall not form part of any offer or contract for the sale of the vessel. The prospective purchaser is recommended to independently check the particulars. The vendor is not selling in the course of a business unless otherwise stated. Personal property is excluded from the sale of the vessel unless specifically included in the listing specifications above or in a Purchase Contract. Personal property may be equipment or gear not permanently attached to the vessel including but not limited to: artwork, entertainment equipment, fishing equipment, TV receivers, recreational equipment, kayaks, tools, and personal appliances. Photos that may incidentally depict owners' personal property do not convey that such items are included in the sale of the vessel unless specifically listed herein.

Please note this comments section is public. Please do not post your personal details here. To enquire about purchasing this boat, please contact the broker directly at boatsales@boatshed.com Please read our commenting guidelines before posting.

I remember this ferry boat (The Egremont) when it was in service on the River Mersey.
I went on a school trip - down the Manchester Ship Canal aboard it.